I’m almost to the point of releasing my first theme for WordPress called “Round and Round”. My goal for this first one, was just to design a clean, uncluttered theme that has a different look than others I’ve seen out there. I’m more of a design person than a code person, so I didn’t set out to create a theme with lots of fancy options. My original idea for the post area was to use transparency so that you could see the background faintly through the white, and it looked really cool… until I realized what you CSS uber-gurus already know: the transparency will apply to everything in the div, not just the background. So, images in the posts were transparent to the same degree as the background, and that would never work and I had to get rid of the effect unfortunately.

This being my first theme, I thought before I released it, I would ask any who are willing to check it out here, and give me some input. Any constructive input is appreciated! I’m considering offering a couple of different background options here on this site that users could easly switch out if they wanted something different than the swirly dots. Is that something you think people would make use of? 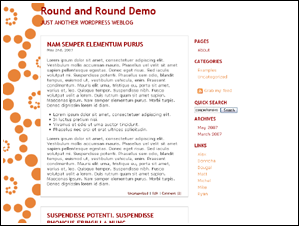