Let me tell you a story…

Once upon a time a running group decided they wanted a new web site design. They thought that going to one of those “crowdsourcing” sites would be a great way to go because they could hold a design contest and get lots of ideas and then take a vote on which was the best. This is what they ended up with (go ahead and click on the image so you can see it in it’s full glory): 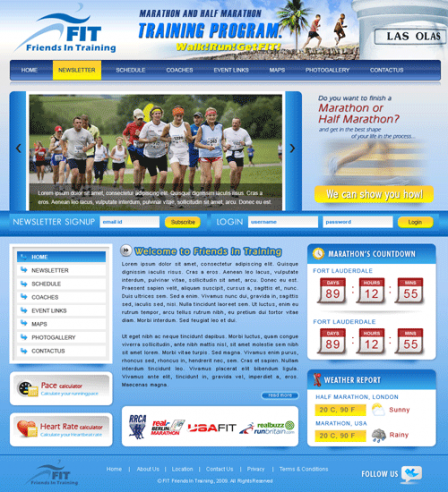 One of their group is a former client of mine who has good design sense, and she thought the site was sort of awful. She had taken the reins with the project and sent the Photoshop file asking me to keep the same basic design (since the group liked it), but to “fix it” so it looked and worked better. I realize most designers would have probably said no to the request, but I wanted to help her out and I had time in my schedule for some extra work, so… here’s the site after I spent some time on it: 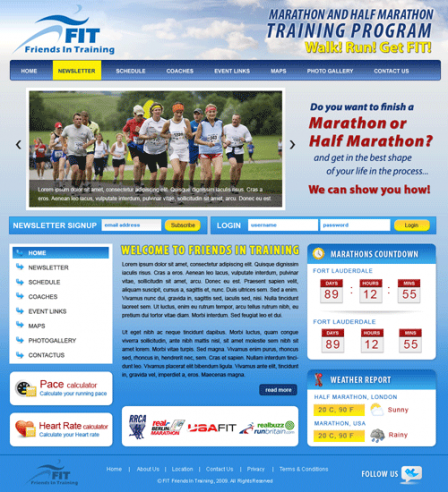 It’s still sort of awful in some ways, but in several important ways it’s a much more effective site.

There were WAY too many fonts used and almost none of them were web safe. Much of the text had drop shadows and outer glow applied which interfered with legibility. A good rule of thumb when designing a site is to keep the number of fonts to 3 or less and make your main font a web safe font so everything doesn’t have to be a graphic element. Also, be very judicious about effects applied to fonts as they can interfere with legibility.

The site was plainly over-decorated. Everything had a gradient, strange shadows inside and outside of containers, extra borders and pictures. The eye does not know where to look. Clean visual elements allow the visitor to easily process what they’re seeing so they can interact with the site in a productive way. When in doubt, keep it simple.

Visitors should be able to take in a site in just a couple of seconds and have a decently clear idea of what the main message is and what you want them to do about that message. If fonts are too small, illegible or hidden within visual clutter, the message is lost.  If the message is lost, it does not matter how “pretty” the design is.

And the moral of the story is…

You get what you pay for.  This organization paid for a design that would have been a big, bloated, ineffective site. The person who did the original design likely didn’t know any better. When you’re just starting out, you make mistakes- it’s just part of the process.People who participate in these kinds of design contests are almost always inexperienced and mistake-prone, and the mistakes they make will often cost more than the money you saved by using a design contest site in the first place.

You can read more about crowdsourcing/spec work sites in this interesting article about design contests at Web Designer Depot.