I’ve been reading Chris Garrett’s blog since I began blogging, and have always found it to be an outstanding resource. Reading his e-book, “How to Write Killer Flagship Content”, had a great deal of impact on how I think about my content. If you haven’t read it, stop on over there and subscribe to his feed to get a free copy. 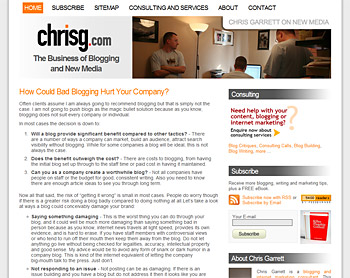 ChrisG’s recent site redesign was in some ways a nice update to the look, but much of the updating left the site looking a bit like “Old Media” rather than “New Media”, and doesn’t do Chris justice. It’s a good case study for the difference just a few tweaks in design and typography can make, so I thought I would make some adjustments to the site (using the great Firebug tool for editing CSS live) to demonstrate.

First some comments, and then I’ll show you the results:

Check the new version out here. What do you think? Obviously not huge changes, but subtle tweaks that make a noticeable difference in the visual appeal of the site.

I enjoy doing this kind of blog design review, and I think it’s profitable to look at how some simple changes can make a big difference. If you’re interested in your site being a subject for a design review, let me know. Obviously, I can’t do every site submitted, but will need to choose sites that make for good case studies. Chris didn’t ask for this review by the way, and I hope he won’t mind my constructive criticism. This post is written with the best of intentions.