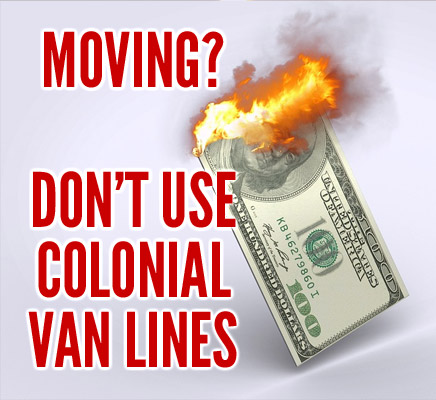 Moving is a stressful time. Whether it’s in town, or across the country, choosing a company to move your stuff is extremely difficult. Are they going to arrive on time? Are they going to deliver when they said they would? Is this a good price? Are they estimating the weight of my stuff correctly? We hadn’t moved in almost a decade, and when we started to look for moving companies to handle our cross-country move this summer, I called multiple companies and got estimates. When I spoke with Colonial Van Lines, the person who gave me the quote seemed like he really knew what he was talking about and was so helpful. He told me all the things I expected to hear from a reputable, experienced moving company. He talked about the semi, and the four moving professionals, the quality of service, etc. He gave me an estimate based on the list of our furniture, etc. I came away from the conversation feeling good about finally finding a company to move us that wasn’t going to cost more than we could afford. Boy was I wrong…

Everything on their website, in my discussion with their estimator, and even their name seemed to indicate that they were a regular moving company, instead of what they actually are, which is a company that facilitates moves by sub-contracting with other businesses to handle the actual move. We were expecting what they promised – the 4 experienced movers and the semi with enough room for our stuff. What actually showed up, when they finally showed up, was two men and two rented trucks. They had NO MOVING EQUIPMENT except the rinky-dink dolly that came with one of the trucks and about 3 moving blankets. For the first several hours, only one of the guys really did much work, and he was as slow as molasses. We were backing up against the time when our storage unit was going to close, and my husband and I jumped in to help get the stuff loaded. We spoke with Colonial’s customer service multiple times, with no real result, other than they assured us they’d make sure there were 4 guys to unload the stuff.

We headed off to our destination city, really wondering whether the guys would show up at all. They did arrive on the day promised, several hours late. But, it was the same 2 guys and still no moving equipment. We moved into a brand new house, so were understandably concerned when these guys were trying to bring in appliances and large furniture with inadequate equipment. Sure enough almost immediately, they put a big scratch in the kitchen floor trying to drag the refrigerator across using the little dolly. As we began to unwrap the furniture, we saw the results of their lack of experience and equipment everywhere: gouges out of our dining table, the ends of our leather living room furniture rubbed off, our dryer not working at all because of damage to the top, and more. They also paid little attention to the labels on the boxes, just putting things down in whatever room seemed convenient, and in such a way that you couldn’t even get in the room. We were told, like a regular moving company, they would do things like set up the beds. They were in too much of a hurry to leave to do this, and couldn’t have even if they wanted to because of the way they had put the boxes in the rooms.

If we had paid $4,000 for the move, we probably would have chalked it up to “you get what you pay for”, but they charged us over $10,000. This was multiple thousands of dollars above the high end of the estimate they had provided. Even paying them was challenging. We had to pay them before they would unload the stuff, and the claimed they couldn’t take a credit card because of some problem with their merchant account and they needed us to use a debit card. We pushed back on that of course, and they managed to figure out how to take our credit card after all.

Colonial sent a customer satisfaction survey almost immediately after the move was complete. We filled this out describing every detail of the horrible service. No response. I wrote a scathing review on Google, and guess who called within hours of it posting? They apologized for the bad experience, and wanted me to know that they weren’t going to do business with the subcontracted movers any longer, and would I please take down the review. We have since learned that they spend a ton of time and resources working to get people to take down bad reviews. If only they spent as much time trying to fix their horrible business model. The truth is, when you pretend to be a real moving company and then subcontract out all the actual moving, you have almost no control over the quality of service people are going to receive.